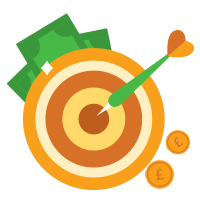 Darts betting is available at many UK focused online betting sites, and it usually takes two forms: bets on tournament winners and match up bets. Darts bets on tournament winners can offer longer odds, as it is hard to pick an overall champion in a sport of inches such as darts. Of course, this really depends on who is playing. The darts odds for match up bets can vary wildly between each pair of players - a former champion against a newcomer will see very uneven odds, but two well established pros will likely have similar prices.

While all the top professional darts players used to play in the BDO, that is not the case currently. Despite the decline of the BDO, there are still plenty of darts betting opportunities for BDO tournaments at online betting sites.

The biggest tournament on the British Darts Organisation calendar is the BDO World Darts Championship. You may at first think that the BDO is making a big claim by claiming a world championship when it is a British organisation, but former champions Raymond van Barneveld and Tony David both hail from outside the United Kingdom.

In 1994, a group of the top 16 darts players decided that the BDO was not looking after the sport properly and they broke away to form the Professional Darts Corporation. This group included every former BDO champion that was still active, a major blow to the legitimacy of the BDO World Darts Championship.

The main competition for the Professional Darts Corporation is PDC Premier League Darts. It is played from February through May and broadcast each week on Sky Sports in the UK.

PDC Premier League Darts pits 8 of the best darts players in the world against one another in a double round robin tournament, playing for a top prize of £125,000. Phil Taylor has won almost every instance of the tournament so far, and in 2010 defeated the reigning champion James Wade to restart his winning ways in Premier League Darts.

Each December, the best darts players in the world gather for the PDC World Darts Championship. This is the richest darts tournament in the world, offering a full prize pool of £1 million and a £200,000 first place prize to the winner.

Phil Taylor has won the majority of PDC World Darts Championships so far, and he would have to lose for close to a decade before that stopped being the case. It's impossible to overemphasise just how dominant he has been, having even avenged his most important loss to Raymond van Barneveld.