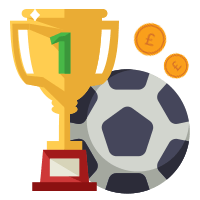 What we now know as the UEFA Champions League began in 1955, but it has only been in its current format since 1992. Similar to the World Cup, 32 of the top domestic clubs from the United Kingdom and around Europe are given the honour of competing in the annual Champions League competition. Prior to 1992, the tournament was fittingly known as the European Cup.  No matter what you call it, the games see plenty of action at casinos online. Football Champions League matches are always a top draw.

If you live in the United Kingdom, you probably know that Britain has some of the world's best football teams.  When it comes to qualifying for the Champions League, some nations are given special precedence over others. The British Premier League for example allows direct qualification for their top teams simply because the quality of the league is much higher than something like the Dutch domestic league.

Some teams are forced to compete in two-legged qualifying fixtures in order to reach the group stage of the tournament. This not only allows for more matches to be played, but it also means that small and unknown clubs have the chance to take on some of the best teams in Europe.  Either way you can count on more betting at sportsbooks and online casinos. Football Champions League action league is ready to dominate your betting card in the UK.  All you have to do is visit your local United Kingdom bookmaker, internet sportsbook, or participating casinos online.

Football Champions League betting is the perfect introduction to real money football wagering because it's played every year, and there are always potentially lucrative long shots in the competition.

Football Champions League: How To Bet

Unlike the World Cup, the Champions League runs every year.  That means there are always chances to wager at your local bookie or at a casino online.  Football Champions League features match after match of top football action.  You can place real money on matches in much the same way as any other football game, including:

With several UK teams in the tournament British oddsmakers spend a fair amount of time plotting out the Champions League.  You'll most likely see fractional odds (e.g. a £1 stake on a 4/1 bet will bring in real cash winnings of £4), but because of the European flavour you may also encounter decimal odds. Decimal odds take the original stake AND winnings into account. For example, 4/1 fractional odds would read 5.00 (£4 winnings + the £1 stake) in decimal odds.  When placing a wager at internet sportsbooks or casinos online, Football Champions League punters can usually toggle between decimal, fractional, and even American style odds.  Just make sure you understand what you are betting on and how lucrative they payouts are.  Don't be afraid to ask when visiting a casino online. 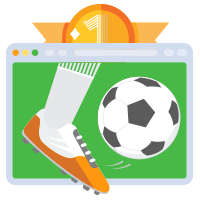 If you live in the UK and aren't a fan of wagering online, you can wager real money on the Champions League in any high street bookmaker. Most matches are broadcast on British TV, so they'll very likely be airing the top games in there as well.

For a wider range of odds, more flexible stakes, and superior payouts, you'll want to visit an internet sportsbook or online casino.  Football Champions League matches aren't just widely available, but you can compare sites in real time to secure the best odds.  It’s usually wise to spread your bankroll around.  Many sites now stream matches live or provide you with links to licensed real time feeds.  This is particularly great if you plan on taking advantage of live betting, which let you place wagers on what happens during the game. Just make sure you have enough screen real estate to watch the game and wager at an online casino.

Real Madrid hold the most Champions League trophies of any competing team and ended a 12-year drought when they won the cup again in 2014.  While there are no sure things, you can stand to profit more than at a casino online.

Why Bet On Champions League?

Despite being restricted to UK and European teams, the Champions League is still considered the top, or at least one of the best, club football competition in the world. Many members of the British public already follow a team and will be well placed to determine how that team will compare with its opponents if they make it in to the Champions League.  It's always best to wager on what you know at online casinos. Football Champions League wagers really do make the most sense.

Whether you've tried sports betting before, or just fancy a change from the online casino, football Champions League betting is the perfect introduction because it's played every year. You'll always find potentially lucrative long shots when underdogs make it into the competition.  The best part, at least from the perspective of punters in the United Kingdom, is that all of the games are played in a time zone that lets you watch the action in real-time. Even the coveted World Cup can't always make that claim.

There's no need to burn the midnight oil just to get the best odds at online casinos.  Football Champions League action gets pretty intense. The number of games played teaches teams to master their stamina and, in turn, it can teach you to carefully manage your real cash bankroll. That's a valuable lesson even if you rarely visit a casino online.

Whether you've never wagered on the internet or have already found success at an online casino, football Champions League matches will deliver the excitement you deserve.  Yet there's no need to get carried away and bet recklessly.  Where you wager is almost as important as what you wager on.  Luckily our betting experts have already found the best UK sportsbooks and online casinos.  Football Champions League bets are available at these top sites in the United Kingdom.