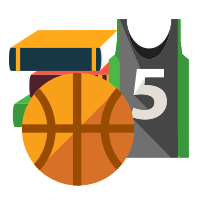 When you think about the most popular sports played throughout the world, basketball will undoubtedly be one of the first to come to mind. Created in the 1890s as an alternative to American football with less risk of injury, the game grew rapidly in US colleges resulting in the creation of the NBA after World War II.

Having captured the attention of the USA for decades, more and more people in the United Kingdom and around the world are tuning in to watch this exciting and often acrobatic game. With the perpetual growth of online gambling, British basketball fans are now able to wager real cash on all of their favourite games whenever they wish.

Although you can place all sorts of real money wagers on basketball games on the web, from who will score the first basket to how many fouls will be committed, the two most common types of bets are as follows:

The point spread is used by sportsbooks as a type of handicap. For example, let's say that a top team is a ten point favourite, or -10. Place a real money bet on that team and they would have to win the game by eleven points for you to win. But, place a bet on an underdog team with a value of +10 and you can still win even if they lose the game by 9 points or less.

An over/under bet involves betting on the combined score of the two teams playing, rather than which one will win. Bettors wager on whether the total score will be over or under a certain number. If the combined score matches the over/under number, it's a push and bettors receive their original bet back.

More and more people in the UK are tuning in to watch and wager real cash on the exciting and often acrobatic game of basketball.

Where To Bet On Basketball 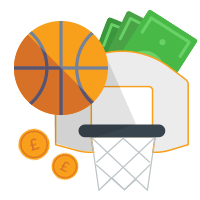 For British players looking to place real money wagers on basketball, online sportsbooks are probably the best bet. That's not to say that your local bricks and mortar bookie won't offer basketball, because some will, but here's why we recommend sticking to the internet:

Why Bet On Basketball?

Back in the day when moneyline bets were more common, placing real cash bets on the favourite in a basketball game was a quick way to make some easy money. Since the introduction of the point spread, that's not quite so true anymore. But thanks to the simplicity of over/under bets and the fast pace of the game, it remains a top choice for UK gamblers who want a change from betting on football or horse racing.

With odds that compare with and are often even better than in the online casino, basketball sports betting is great for making the bankroll last a little longer and having some fun while doing so.