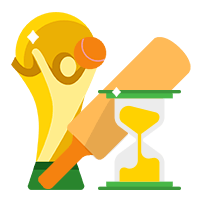 Every four years the powerhouses of world cricket (and a few minnows) gather to fight it out for the sport’s ultimate prize, to be crowned winners of the Cricket World Cup. This page is dedicated to the history of cricket’s greatest event as we look towards the 2019 edition in England and Wales

Played to the traditional one-day cricket format (50 overs per side), the first Cricket World Cup was held in England in 1975. There have been 11 tournaments in total, with five different nations crowned champions and Australia leading the pack with a haul of five World Cup wins in total.

Here’s a list of tournament winners, with the host nation in brackets:

At the inaugural Cricket World Cup, there were no day-night fixtures and players wore traditional white clothing, more often associated with Test cricket. The West Indies team, captained by the great Clive Lloyd, cruised through the tournament undefeated to go down in history as cricket’s first world champions.

It was the same story four years later, when the West Indies returned to England to defend the title they won in 1975. The West Indies again reached the final undefeated and beat England to make it back-to-back World Cup. This was the legendary team of Viv Richards, Desmond Haynes, Michael Holding and Co. playing to their full potential.

It looked like West Indian dominance would continue in 1983. They lost just one match on route to a third consecutive final, however they were beaten by India in the final in a match where Kapil Dev took four wickets as the West Indies were bowled out for just 140.

Four years later the tournament was held outside of England for the first time. India and Pakistan co-hosted the World Cup, and it was Australia who rose to be crowned world champions. After a period devoid of success Australian cricket roared back to life under skipper Allan Border. The final at Eden's Gardens between Australia and England is still regarded as one of the all-time great one-day matches.

Although the inscriptions on the Cricket World Cup trophy have been reserved for traditional cricketing nations, there is a history of major upsets in cricket’s showpiece event.

Defending champions Australia and New Zealand co-hosted the 1992 World Cup. It was a tournament that will be remembered as South Africa's return to the international sporting landscape. An Imran Khan-inspired Pakistan defeated England in the final to hoist the cup for the first time.

In 1996 Australia reached the first of four World Cup finals in a row, but the tournament was marked by Sri-Lanka's arrival in the big-time. After being the whipping boys of international cricket, Sri Lanka produced stunning displays in their home conditions and  stunned the Aussies in the final. The World Cup had now expanded to include 12 teams.

The World Cup returned to its traditional English home in 1999. Australia lost two of its first three matches to be precariously placed. However they gathered momentum and did not lose another game on their way to a second World Cup triumph.

2003 saw the tournament move to Africa for the first time with South Africa, Zimbabwe and Kenya co-hosting the event. Australia waltzed through the tournament undefeated and amassed a record 359 runs in the final against India to claim back-to-back World Cups.

The Aussies made it three in a row in 2007 in the West Indies, with Adam Gilchrest smashing 148 in the final against Sri Lanka.

Sri Lanka were beaten finalists again in 2011, this time falling victims to hosts India in Mumbai. Mahela Jayawardene’s century in the final wasn’t enough to save Sri Lanka as India knocked off their 50-over total of 274 with 10 balls to spare.

The most recent World Cup was won on home turf by Australia, who took their tally to five wins with a dominant seven-wicket triumph over co-hosts New Zealand. The Kiwis were bowled out for just 184 – a total Australia reached in 33.1 overs to seal an emphatic victory.

Upsets at the World Cup 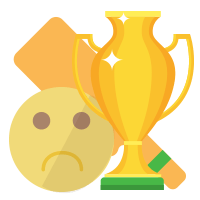 Although the inscriptions on the trophy have been reserved for traditional cricketing nations, there is a history of major upsets in cricket’s showpiece event.

In 1983 Zimbabwe caused a stir when the upset the much-fancied Australians by 13 runs in what is considered the first major upset at a cricket world cup.

Kenya have surprised many in their short World Cup experience. In 1996 they defeated a West Indies side that went within a whisker of making the final, and in 2003 they qualified for the semi-finals following wins over Bangladesh and Sri Lanka.

Ireland caused a major upset by beating Pakistan in the 2007 World Cup and in 2011 achieved another impressive result by beating West Indies.

In 2019 the Cricket World Cup will return to its spiritual home of England, who will share hosting duties with Wales.

Cricket World Cup betting can be a tricky proposition, so be sure to do your research. Watch out for the smaller nations, as history suggests upsets are very possible.