For extraordinary rugby union action, it pays to head south.  Discover the southern hemisphere's biggest rugby union contest with teams from Australia, New Zealand, and South Africa battling for supremacy. Learn why the competition is gaining popularity in the United Kingdom.

Super Rugby is the top rugby union competition in the Southern Hemisphere, comprising teams from Australia, New Zealand, and South Africa.  Despite the distance the competition is popular in the United Kingdom and at online casinos. Super Rugby began in 1996 and the tournament has been known by many names over the past decade, with Super 12 becoming Super 14 only to be turned into the Super 15 shortly after that. The organisers have since wised up and rebranded the competition as Super Rugby, which leaves room for further expansion.

Super Rugby has undergone several structural changes over the years but now features three conferences, one for each nation.  The South African, New Zealand, and Australian conferences each feature five teams.  Every team faces all of its conference rivals both at home and away. In addition, teams face four of the five teams in each of the other conferences once. Whether you live in the UK or the southern hemisphere, there's always great punting opportunities at online casinos.  Super Rugby punters who are inclined to tune in should note that the action spawns several time zones, which can make for erratic viewing.

The Super Rugby ladder, log, or standings are determined by competition points. Teams earn four points for a win, two points for a draw, one point for a loss of fewer than seven points, and a bonus point for four or more tries.  At the end of the regular fixtures, the three conference leaders along with the remaining three teams with the highest number of competition points proceed to the playoffs.  That's where the real action is at bookmakers and casinos online.

Super Rugby finals begin with the third seed facing the sixth seed and the fourth seed facing the fifth seed in a sudden death match. The winners of those two matches compete against the first and second seed respectively, with those victors ultimately playing for the championship.  With a schedule that runs from February through July, there's plenty of wagering opportunities at UK casinos online.  Super Rugby is easy to follow in the United Kingdom thanks to coverage on Sky Sports.

For most British punters, turning to the Internet will be the only way to place real cash wagers and find competitive odds on Super Rugby, as this event is focused on Australia, New Zealand and South Africa.

Already the largest, and best, rugby union tournament down under, Super Rugby is considering expansion to include teams from Asia, Canada, the USA and Argentina. There's no plans to allow UK teams to compete though!  At least you can wager at your favourite sportsbook or casino online.

At a casino online, Super Rugby bets include the usual straight up wagers on match results and winning margins that British punters are used to, but Australians are also very fond of first try scorer bets and other exotic bets. This means that, if you compare online casino Super Rugby fixtures with other rugby union competitions, you'll find a wider variety of things to place real money wagers on. That's true provided you visit internet bookmakers or online casinos.

Super Rugby competition is fairly well balanced these days between New Zealand and South Africa. In Australia the best athletes tend to go into rugby league instead, but Australian teams do still occasionally make it into the Super Rugby Grand Final including in 2011, 2013, and 2014. As you can probably imagine plenty of Super Rugby bets get placed when that happens, especially by those in the United Kingdom who have family members in Australia.  Luckily it's easy to place online casino Super Rugby bets anywhere in the UK.

Sportsbooks And Casinos Online:  Super Rugby Bets In The UK 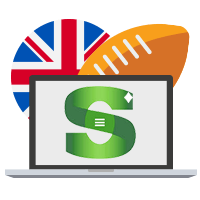 For most British punters, turning to the Internet will be the only way to place real cash wagers on Super Rugby. On the web, bookmakers with a southern connection are your best bet and that includes sportsbooks at online casinos. Super Rugby betting is likely offered with decent odds  if the site accept Australian dollars, New Zealand dollars, or South African Rand.

Despite the fact that online gambling is illegal in South Africa, there's no shortage of sports betting sites catering for residents of the country looking to make real money wagers.  If you live in the UK, it's best to steer clear when you see a South African casino online.  Super Rugby wagers are better placed elsewhere.

When visiting a sportsbook or casino online, Super Rugby odds are usually expressed in decimal format, which is the predominant style in Australia. The decimal format expresses the value of an original £1 wager plus the winnings from that bet.

For example, a real money bet of £10 on something with odds of 3.00 would return £30 (£20 winnings plus the original £10 stake). This isn't in keeping with the most common form of odds in the UK, fractional, but is easy enough to pick up.  If you end up visiting United Kingdom sportsbooks or online casinos, Super Rugby odds may be displayed fractionally by default.

Super Rugby betting may not be all that common United Kingdom, but it's hardly a minor sport. It's broadcast in over 40 countries, including Sky Sports on British television. Most Brits already know that Australians and New Zealanders are mad for their rugby but, as their several trophy wins and runner-up prizes show, it's one of the top sports in South Africa too.  As the competition grows, so will the action at casinos online.  Super Rugby simply packs a punch you won't find elsewhere.

As a result, the passion with which these teams play make Super Rugby seriously exciting to watch. With 13 championship wins under their belt, New Zealand teams have dominated the competition for a number of years. They aren't a sure thing by any means but if you're out of your comfort zone of the online casino, Super Rugby bets placed on the Crusaders or the Chiefs aren't a bad way to go, but nothing is guaranteed. Despite finishing fourth in 2015, the Highlanders came out of nowhere to win the championship.  Few predicted them to win as evidenced by the lucrative odds at casinos online.  Super Rugby's innumerable surprises are all part of the fun.