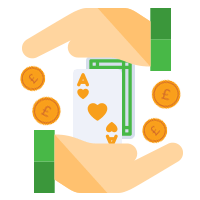 According to legend, the beginning of poker can be traced back to 900 A.D. in China. It was an evolved version of the Chinese style of dominos that was preferred by Chinese emperors. Others claim that poker has its roots in 17th Century Persia, where it was called As Nas. Regardless of the mysteries surrounding its origins or questions about where poker came from, everybody agrees on one thing - poker is a card game that’s here to stay.

Just like any other celebrated card game, poker involves playing with a standard deck comprising of 52 cards. While there are practically a thousand or more variations of poker, each is based on the elementary idea: every man or woman, for himself or herself. Every single player huddled around the table struggles to put together the best-valued hand of cards. Amongst other elements, the infinite variety in games, player styles and value of hands are the reasons behind poker’s popularity.

Whether you’re talking about the UK or anywhere else in the world, when it comes to measuring popularity, poker’s status is phenomenal. Presenting anyone and everyone with convincing potential to make big money, it is certainly difficult, if not impossible, to resist playing the game. In 2005, the annual revenue of online casinos, generated from poker alone, was around 140 million Pounds per month.

The Skill of Reading Hands

Irrespective of your personal style, the stake you put down or the number of players in the game, having knowledge of poker hands is crucial for any effective strategy. Once you know the hands, it becomes easier to make an educated guess about the hand your opponents might be holding.

In a live casino setting, mentally predicting your opponent’s hand helps you to bluff better. But what if you’re playing online from your desktop or through a mobile app on iOS or Android? That’s when it gets even better. It helps you make better moves even when you’re unable to pick up on your opponents’ tells. Therefore, it is vital for all players to have a better understanding of poker hands to improve their chances of success and win real money.

In 2005, the annual revenue of online casinos, generated from poker alone, was around 140 million pounds per month.

The following is a list of every winning Poker hand in standard games of Poker. While in some cases (such as Video Poker) you may find new hands like 5 of a Kind, or Wild Royal Flush, regular table Poker games will implement the following list of winning hands:

The Royal Flush is the highest possible winning hand in a game of Poker. It is essentially a Straight Flush running suited from 10 through to Ace.

A Straight Flush is a sequence of five consecutively ascending (or descending) cards of the same suit. It can be made from any run of suited cards except 10 through Ace, which is a Royal Flush.

Four of a Kind

Four of a Kinds come about when a hand contains all four suits of the same card, as well as an unmatched card. In games where more than one deck is being used it is easier to earn a Four of a Kind.

A Full House uses all five cards to make the winning hand. It is made up of both a Three of a Kind, and a Pair.

A Flush is a hand made up of five suited cards of any value. In a game of Poker, a Flush is described by its highest card. e.g. Ace-high Flush, or King-Queen-high Flush.

A Straight is a run of five consecutively ascending (or descending) cards of any suit. If every card is of the same suit then the hand becomes a Straight Flush. The Ace can be used as a high or low card.

Three of a Kind

A Three of a Kind is a hand of three cards of the same rank, plus two unmatched cards. If the two extra cards are a pair, then the hand becomes a Full House. Suit has no affect on Three of a Kinds.

Two Pair is a hand made up of two cards of a particular rank, two cards of another rank, and one unmatched card. The pairs must be of different rank otherwise the hand is a Four of a Kind. Suit has no bearing on Two Pair. In a game of Poker, Two Pair is usually described as "higher pair over lower pair". For example, Kings over Nines, or Tens over Fours.

One Pair is the lowest combination Poker hand. It contains two cards of the same rank and three unmatched cards. Suit is not a factor in creating a One Pair hand. Higher pairs defeat lower pairs.

The lowest possible Poker hand is the High Card. For a High Card to win there must be no other winning combinations from active players. A High Card hand is made up of five unsuited, unmatching cards.