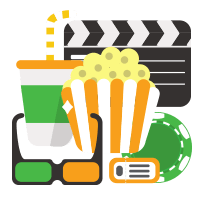 Casinos are more than just amazing places to visit. They’ve also served as the perfect setting for some of the finest motion pictures ever filmed. From Las Vegas to Montenegro, casinos and the art of gambling have made for riveting storylines and enthralling characters.

There’s no sense gambling the next time you feel like renting a DVD or streaming a film. Just watch one of these top ten casino movies. From critically acclaimed blockbusters to underrated classics, these casino films are all sure bets.

It’s hard to believe it’s been nearly a decade since Daniel Craig made his Bond debut in this modern classic. This rebirth of Bond works particularly well since it depicts 007 as an agent who is newly licensed to kill. His first mission is to foil Le Chiffre, the world’s leading terrorist banker. Bond finds himself playing the most important high-stakes poker game imaginable with the world’s security on the line.

Fun fact: given the popularity of poker at the time of release, Texas Hold’em served as Bond’s games of choice rather than baccarat, which was used in the original 1953 spy novel.

Despite faring poorly at the box office during its theatrical release, Owning Mahowny re-entered the spotlight in the aftermath of Philip Seymour Hoffman’s death. Based on a true story, Hoffman plays Dan Mahowny, an unassuming Canadian banker who embezzles ten million dollars to fund his gambling addiction. This powerful film focuses on Mahowny’s personal turmoil and his gambling-induced downward spiral.

William H. Macy stars as Bernie Lootz, a perpetual loser whose bad fortune is so infectious that the casino pays him to stand near winning players so that their luck turns. When Lootz falls in love with a cocktail waitress he loses his powers of misfortune. What he doesn’t know is that the object of his affection was actually hired by his boss to prevent him from leaving Las Vegas.

A vastly superior remake of the 1960 classic, George Clooney stars as Danny Ocean. After being released from prison, Ocean aims to pull off the biggest heist in history by robbing the Bellagio, Mirage, and MGM Grand to the tune of $150 million dollars. The film, which spawned a couple of sequels, features an incredible cast including Julia Roberts, Brad Pitt, Bernie Mac, Matt Damon, and Carl Reiner.

This dark crime drama casts Clive Owen as Jack Manfred, an aspiring writer who takes a job as a croupier to make ends meet. Watch his life unravel as he gets sucked into the nefarious world of gambling and is forced to consider becoming the inside man in a massive ruse. Filled with inner monologues, this British classic reveals the sullen side of casino life in a particularly captivating manner.

Inspired by real events, 21 tells the story of six gifted university students who are recruited and trained by their professor to count cards for profit. The team heads to Las Vegas with the goal of card counting their way to millions. It’s a thrilling tale filled with need, greed, anguish, and plenty of rancour.

This Martin Scorsese masterpiece depicts the violent demise of a multi-million dollar casino empire. Watch the mafia take control of Vegas and lose it all in a story that’s based on real mob history in Sin City. Stars Hollywood heavyweights Robert De Niro, Joe Pesci, and Sharon Stone.

P.T. Anderson's directorial debut tells the story of Sydney, a professional gambler played by Philip Baker Hall, teaching John, a broke loser played by John C. Reilly, how to make a living wagering. This character driven drama is a departure from typical casino movies yet it reminds us that benevolence is rarely what it seems. Also stars Samuel L. Jackson and Gwyneth Paltrow.

This 1970s classic brings to light the friendship of two gamblers who unite over their shared love for wagering. It’s a timeless story about passive peer pressure and pleasure. The drama, which stars the dynamic duo of George Segal and Elliott Gould features great dialogue and classic quips that have held up surprisingly well.

Don’t bother with the mediocre 2014 Mark Wahlberg version of this film. James Caan gives a spectacular performance as a literature professor who is addicted to every conceivable form of gambling. Watch compulsions destroy a man who will never be satisfied even if his own delusions panned out in this dark drama. This might be Caan’s best performance, but watch out for the unexpected twist at the end.