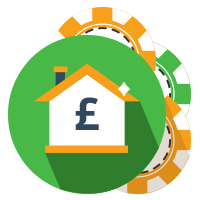 As soon as you log on to an online casino, you're behind. Every game you play, and every bet you make, will be statistically behind as soon as it's been laid.

But the house advantage needn't be a reason to pack up the laptop and leave. Let's take a look at why house edge can be used in your favour, and how best to put it your advantage.

What is House Edge?

House edge is the statistical advantage the casino has over the betting player over the long term on EACH BET. Simply, it's the difference between the payout and the wager of the player in the long run.

If casino games were a straight one-on-one battle of odds - like flipping a coin - there would be no house edge; the chances would be 50% to the player and 50% to the house.

However, because the house skews the games in their favour, the edge is always leaning towards the house. Winnings in casino games NEVER make up for a player's losses, and that's the edge. Over time, then, the house takes more than the players do.

If a player knew that he would lose, say £5 or £10 of every £100 bet, he would probably never log on to a casino in his life. The key, of course, is to work the system in your favour and make sure you come out on top in the long run. It's important to find the games and bets with the best payouts to players and that carry the most favourable house edge (the difference).

Depending on what variation of roulette you're playing, the house edge can be pretty high - or surprisingly low.

In a game of roulette, the casino has set payouts players get awarded when they hit a number or outside wager.

Let's look at a single-zero game (European) compared to an American roulette game (with an added double zero slot):

As you can see from the list, an outside bet like Red/Black or Odd/Even pays even-money when it lands (1/1). But the bet loses if the green zero comes up - once in European with the single zero, and twice in American with its 0 AND 00 slots.

Generally speaking, online variants of roulette are the same as offline. Both European and American formats will be on offer at all good UK Internet casinos and carry the same house edge as their offline cousins.

However, at an online casino you may find an interesting variant like Multi-Ball or Multi-table roulette which can skew the odds a little in the favour of either the house or the player.

Like roulette, the long-term house advantage in blackjack can be skewed a little if you don't over-commit yourself with silly bets.

Statistically, blackjack has the best house edge of all casino games - around 0.5-6% - and as long as you employ some simple tactics for standing you can make the house pay. However, the player is always at a disadvantage because they take their turn first. The dealer goes second and that always puts players in a tricky place as they have no information to go on.

With card-counting, the house edge can actually move in the player's favour, effectively resulting in a 'Player Edge'.

In a typical offline casino in the UK, European Blackjack might have a house edge of around 0.5 percent. However, online you'll be treated to plenty of exciting variants.

Rules of each variant differs (when the dealer stands, what a blackjack pays out) but in general, Super Fun 21 has a 0.95 percent edge, Spanish 21 has a 0.76 percent casino advantage, while Atlantic City Blackjack carries a house edge of 0.43 percent. 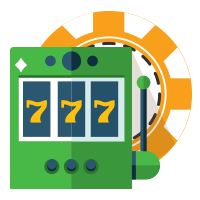 The good thing about slots is that their house edge can be found clearly (usually) in the game's information pages.

Head to the paytable where the various payouts and jackpots can be found and you'll see the edge, referred to as RTP% (Return to Player percentage).

The RTP is a theoretical (not definitive) long-term return to players for every $100 bet. So, for example, a slot with an RTP of 95 percent will pay back £95 to players over the long-term for every £100 wagered.

Of course, some players might lose consistently on the game before quitting, while someone else might come along and bag the big jackpot on their third spin. For those players, the RTP is massively different.

How Reels Change the Payouts

Slots have reels packed with symbols, and it's in this ordering of symbols where the game's payouts can be determined. More jackpot symbols on the first two reels means a likelihood of some big wins, while more Wild symbols on the reels means more regular, small wins.

Players can look at the paytable to see how many unique icons are in the game, and the various payouts for each winning combination. But they don't know the order in which they come on the reels, and indeed, how many symbols per reel there are. The more symbols per reel, the higher the odds of you hitting a big jackpot.

It's this discrepancy in payout to probability that forms the house edge. You may have odds of 1 in 250,000 of hitting the jackpot, but the actual payout is 10,000/1. Add up all the potential payouts and you'll see that the house is way ahead.

The first thing to do before playing a slot is to check the paytable. If available, find out the RTP and stick to games with around 95-97 percent, if you can find them. Also test out the games with 100 spins or so to get a feel for the game's 'variance'. Does it pay out little and often, or does it suck up cash for an hour before paying out a healthy jackpot?

The one constant of slots is that they take more money than they pay out; that's why the house always wins, and why they're such money-spinners for casinos.

But there's a big difference in the RTPs of land-based slots and online. Offline games will usually hit around 90 percent for an RTP, while online slots will be much higher, generally in the mid-90s.

In a land-based casino, avoid the big flashy slot machines as they are usually worse bets for players. Hit up simple 10-payline slots that don't shout out 'come and play me!' so much. Games with a higher minimum coin bet tend to have lower house edges than those "penny" slots that cater for the casual player.

But while it would be a bit counter-productive of us to suggest that, there are more realistic ways of making the bets count in your favour.

Always keep a tab of your betting, and never over-expose yourself when betting. That is, in roulette you should stick to the outside bets and back-up with one or two inside wagers. If you're playing slots, check the paytable to make sure you're playing games with a good long-term edge for the player. And if blackjack is your game, don't take insurance and think about the variant you're playing.