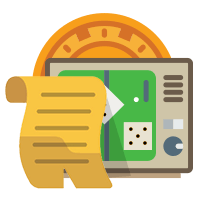 Incredibly, real money online casino games have only been around since 1994, allowing players across the world to gamble without ever having to leave the comfort of their homes.

It's fair to say that technology and games have come a huge way since those early developments, especially when you compare them to what came in the previous 100 years.The first online sites looked very different to the all-singing, all-dancing 3D efforts you see today, but the betting industry's big players still remain.

Online casino history is a story of innovation and persistence. Let’s take a look at some of the big movers and shakers in poker and online gambling over the past 20+ years.

The Caribbean island of Antigua & Barbuda gets the ball rolling with the first online betting licenses. With the passing of the Free Trade and Processing Zone Act, casinos wanting to operate online were given the right platform with which to offer real-money sites to players across the world.

With Antigua making its move, Microgaming is established and releases the first online casino game and poker platforms for players looking to gamble online.

Opening in November 1996, InterCasino (InterTops) becomes the world's first online casino, offering table games and slots powered by Cryptologic for entertainment betting. A far cry from the old one-armed bandit slot machines of the past.

Microgaming launches the first ever online progressive jackpot slot. Cash Splash, still a popular game played today, is played over five reels and features a progressive that is triggered by lining up five appropriate symbols on the final payline. Meanwhile, the tally of online casinos offering real-money betting games rises to over 200.

In 2003, statistics portal Statista projects the online gambling market around the world to be worth $7.4 billion, rising to $41.4 billion in 2021.

The Gambling Act 2005 is passed by the then-Labour government, seeking to update gambling law for the first time since the 1960s. Online casinos are permitted from overseas but only a select "whitelist" is able to advertise games in the UK. The Gambling Commission is established to oversee all casino games in the UK, including remote gambling and poker.

Vuetec Ltd launches Dublinbet, the provider of the world's first Live Dealer online games. Beamed live from the floor of Dublin's Fitzwilliam Club, Live Dealer games made betting on real-life roulette and blackjack possible, dealt by a human croupier and streamed live on the net.

Hastily passed in the US, the Unlawful Internet Gambling Enforcement Act makes it a crime to process online gambling payments made between banks and gambling sites. Despite major poker rooms leaving the US market, many unlicensed casino rooms continue to operate to players betting from the US.

KPMG values the worldwide gaming market at $21 billion. Meanwhile, a milestone for mobile casinos as Apple allows gambling games to be sold via its Apple Store directly to players.

Microgaming's Mega Jackpots series of slots records its first big winner - a Greek businessman who takes down a jackpot worth €6,374,434. The series goes on to award jackpot prizes worth tens of millions of pounds.

HTLM5 was developed and released in 2010, allowing casino games manufacturers to develop games that could run on multiple mobile and desktop platforms. Instant play casino games and sports betting right from your phone, at the speed of light.

The ease with which online slot and video slot games can be played has led to some huge jackpots over the years. And big titles, linked across multiple casinos online, can reach massive prizes for a small outlay.

NetEnt's Mega Fortune slot was hit for a world record prize of €17,861,813 by a Finnish player in January 2013. The jackpot was worth double previous record of 8.6 million Euros, won a year earlier on the Arabian Nights slot.

2013 - Regulated Online Casinos Launch in the US

The new Conservative government passes the Gambling (Licensing and Advertising) Act 2014, which updates the previous 2005 Gambling Act. Offshore sites are targeted with a 15 percent tax on all revenue based on where the players are based, not the sites themselves. In addition, any casino site offering UK-based players betting games must apply for a Gambling Commission license.

Another year, another world record slots prize. In 2021, a British soldier took down the real money Mega Moolah jackpot for a prize worth £13.2 million.

The jackpot was a world record, beating the 17.8 million Euros won two years earlier, and was all the more incredible when you consider it was triggered for a bet worth just 25p.