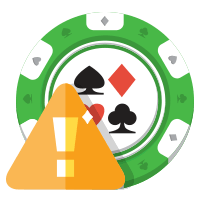 Too many casino players honestly believe they’ve cracked the code. Whether it’s a lucky charm or a secret can’t-lose formula, winning systems rarely work in the long run. Yet beginners aren’t the only ones who dupe themselves. Thinking your good fortunes are guaranteed has plagued the best of us. Luckily it’s easy to avoid making common mistakes when you understand the gambler’s fallacy. Find out what this delusion is all about and how easy it is to avoid.

A Matter Of Chance

Imagine you have a traditional six-sided die. Assuming it’s a fair die, you know that the odds of it landing on the number 5 are 1 in 6.   Yet if you roll the die 6 times, the die could easily land on a 5 anywhere between 0 and 6 times. That’s because each roll is its own independent event.

The gambler’s fallacy is the failure on the part of the gambler to realise that all events, in the example above rolls of a die, are statistically independent. That means that what happened previously will have no effect on what is about to occur. In the example above, you might honestly assume that after rolling a die 6 times without hitting a 5 your odds of landing a 5 the sixth time would go through the roof.   In reality you could roll the die 10, 50, or even 100 times and never hit that 5 or you might hit it every time. There is no such thing as being due, at least statistically speaking

If you spend a few minutes at the roulette wheel you’ll notice the casino proudly displays a history of recent numbers. Players often look for trends to determine which numbers are due. Assuming the wheel doesn’t have weighting problems or structural flaws, this is nothing other than an exercise in delusion. If you love betting on black and red numbers have come up ten times in a row, the odds of hitting red on the eleventh spin are the same as on the first spin.

Understand your chances of winning are identical every turn, and you�ll be more successful.

When players learn about the gambler’s fallacy, they often wonder how casinos protect themselves if each result is independent. The answer is quite simple. In statistics there’s also a law of large numbers. The abridged version is that over time when the sample size gets large enough, be it spins of the roulette wheel or rolls of a die, the outcomes that deviate in one direction another will effectively cancel each other out. The problem for you as a gambler is that there’s nothing to protect you from these variance or deviations. That’s why it’s important not to ignore the math and believe in false probabilities.

The prevalence of the gambler’s fallacy makes casinos rich. Over a hundred years ago when statistical literacy was even lower than it is now, a roulette table at the Monte Carlo Casino hit black 26 times in a row. Gamblers couldn’t believe their luck, incorrectly thinking that it would be next to impossible for the ball to land on black for the 27th time in a row. After casino patrons wagered millions on red, the ball did land on black.  Don’t let the fallacy cost you.

Fly In The Face Of A Fallacy

Whether or not you understand the underlying mathematics of the gambler’s fallacy, it’s important to believe it. You need to treat every spin as an individual event, ignoring what happened before. Successfully avoiding the gambler’s fallacy can be as easy as treating every spin like the first of the night. Pair that with a little bankroll management and you’ll be able to stay in the game longer. Staying power won’t just prolong your thrills but it will give you more chances to hit an elusive jackpot.

In reality the only way to guarantee winning at the casino is to open your own casino. Of course there are big casino winners ever minute of the day. Yet you can be sure it’s not thanks to a system based on pure fantasy passing for fact.