Surely your casino dreams involve winning more than a handful of shiny pounds. It’s the prospect of winning a life-changing jackpot that really gets your heart palpitating. While grinding the night away making minimum blackjack bets might put you ahead in the long run, it won’t make you rich. Although you shouldn’t base your future on the possibility of striking gold, becoming wealthy isn’t completely out of the question. It has happened before. Check out some of the biggest wins in the gambling world.

Have you ever wondered whether anyone hits those impossibly large online progressive jackpots? The answer is yes and probably more often than you might expect. On January 20, 2013, a man from Helsinki, Finland slipped €0.25 into a Mega Fortune machine. Seconds later he hit a record breaking €17,861,813 payout. That really is a mega fortune in any language, but it’s over £15 million around here. Not only did the lucky player hit the jackpot from the comforts of home, but he’s managed to keep his privacy intact. At that point in time, this jumbo win managed to set a record in the Guinness Book of World Records in the online slot winnings category.

The Luckiest Man In The History Of Casinos

The headline might be filled with hype, but anyone who can parlay $50 into $40 million deserves to be called the luckiest ever. You’ll have to venture across the pond, offline, and back in time to 1992 when Archie Karas arrived in Las Vegas with just $50 in his wallet. Within six months he had turned that sum into $17 million playing poker and billiards. After he had trouble finding willing poker opponents due to his hot streak, Karas won millions more shooting dice.

A couple of decades later $40 million still translates to more than £25 million without adjusting for inflation! Too bad he lost it all a few years later playing dice, baccarat, and poker. Apparently luck is fleeting when greed knocks at your door.

92-year old Elmer Sherwin’s age is impressive by itself. While visiting the Cannery Casino & Hotel in North Las Vegas back in 2005, Sherwin really made a name for himself after hitting a Megabucks slot machine jackpot to the tune of $21,147,947 (approximately £14 million). What’s truly fascinating is that he was the first player to hit the jackpot twice, having won an impressive $4.6 million on a Megabucks machine in 1989. Although he had scored a big win, Sherwin religiously spun the slots in hopes of being the first person to win a jackpot twice.

The chance of landing a Megabucks grand prize happens to be less than a million, but Sherwin has managed to be lucky two times! Apparently, lightening can strike twice. He used his first jackpot to travel the world and gave a sizable chunk of his second win to charity.

Defying The Odds On Your Birthday 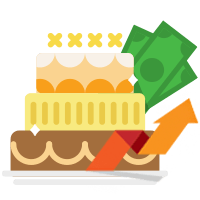 A fertilizer salesman by profession, Fred Craggs from North Yorkshire never spent more on a wager than the price of a packet of cigarettes. Still he managed to win a cool million pounds when all eight of his long shot horses came in on a Saturday in 2008. Even though Mr. Craggs had hit a gold mine on his 60th birthday, he sat quietly through a meal with his family without divulging his glorious secret.

Mr Craggs had placed a bet a week before, on Friday, at a William Hill window in Thirsk. Incredibly, both his first horse and last horse had apt names, Isn’t That Lucky and A Dream Come True, respectively. Although the wager cost Mr. Craggs a mere fifty pence, he told reporters that he could have won the same amount wagering just forty pence. Happy belated birthday Mr. Craggs!

He definitely couldn’t pass for James Bond, yet the billionaire owner of Newcastle United is also a high-roller who loves black 17 on the roulette wheel. In fact, his love for the lucky number continues to football. It is the number stamped upon the back of his Newcastle United shirt he is seen wearing when he watches the game at St. James’ Park.

In 2008, Mike Ashley, Britain’s 54th richest man, walked into a London casino in Mayfair, hoping to get noticed. What better way than placing a series of wagers totalling £480,000 on what might be the most popular roulette number? Not only did Ashley bag a quick £1,284,000 but he also left immediately, walking out more than a million pounds richer. Talk about knowing when to walk away!

The Father Of Card Counting

Although he didn’t amass his fortune in a single session, Dr. Edward Thorp deserves mention. In the 1960s, the father of card counting won over five million dollars. Weekend jaunts net him more than $70,000 per trip if adjusted for inflation. The most fascinating part is that his system was foolproof simply because it was new.

In the early days casinos would politely ask him to leave without knowing how he was winning. Although they assumed Thorp was cheating, in reality he had simply developed a mathematical model that predicted the quality of a deck based on the cards that remained in it. Unfortunately casinos are now on the lookout for card counters, even though it isn’t illegal. What’s sadder is that the art of card counting won’t work online.