A Guide to Playing Craps Online in 2022 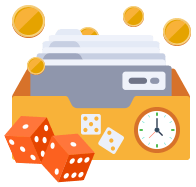 Craps is one of the more popular casino games, however unlike baccarat and roulette, it hasn’t quite caught the imagination of online players yet. This could all be about to change though, as more and more variations of craps are released, and more casinos start to add live dealer craps to their line-up of live casino games. So, how exactly is this game played? And where exactly are the best craps casinos? You’ll find the answers to these questions in the article below.

How to Play Craps

There’s no sugar-coating it: craps is the most intimidating game you’ll find in a casino, thanks to the multiple rules and complicated looking table. If you keep things simple though, you’ll find that you get the hand of things pretty easily. The basic premise of the game is for the dice to show the same number you’ve bet on, at which point you’ll win an amount based on the odds offered at the casino.

So, to get the game started, the player rolling the dice bets on the pass line, before then rolling the dice. If they manage to roll 7 or 11, they’ll double their money; if they roll 2, 3 or 12 though, the player will automatically lose. If any other number comes up though, it becomes the number that you’re shooting to hit. If you manage to hit that number before a 7 is rolled, you’ll double your money. If a 7 turns up first though, the money is lost.

There are, of course, many other bets that can be made as well. For example, you can bet on certain numbers to come up; you can bet on craps being rolled; and you can make a Come bet. These are all more advanced options though, and ones that you’ll learn as you play the game.

Nowadays at least one version of craps available at most good casinos, plus many also offer live dealer craps as well.

A Brief History of Craps

The origins of craps can be traced back to an English game called Hazards, however the rules of this game were then altered and modified by the French. The modern version was first popularised in New Orleans though, and was introduced by the flamboyantly named Bernard Xavier Philippe de Marigny de Mandeville. Through the years it then saw more modifications – such as the addition of the don’t pass bet – in order to increase excitement and prevent players from cheating.

Because of how easy it is to get hold of some dice, craps became popular on the street, as well as with American soldiers during World War II. After the war, it continued to grow in popularity, and soon became a staple game found in casinos during the casino boom of the 1960s. When online casinos came around, craps wasn’t adopted too quickly by the casinos, however nowadays at least one version of craps available at most good casinos, plus many also offer live dealer craps as well.

The Best Bets in Craps 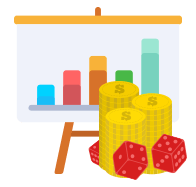 It’s not really possible to say what the best bets in craps are, because they vary depending on the player. For those with a more risk-averse strategy, it’s best to stick to betting on the pass line though, and avoiding the other bets found on the board. Those with the desire to play a riskier style of play though can bet on the selections to the right hand side, which have higher odds, but also less chances of coming in.

One bet that everyone should avoid is the Big 6/8 bet though, simply because it doesn’t represent value for money. If you want to bet on 6 or 8 coming in the hard way, you should instead bet on the selection on the right hand side, as this offers much better odds.

There are loads of different betting options, but beginners should avoid most of them. Instead, simply place a bet on the pass line and watch the game develop, learning as you go. New players can then branch out into slightly different bets, such as Come bets and Field bets, but only once they are familiar with the basic rules. Perhaps the biggest thing to remember is this though: beginners shouldn’t start by placing multiple bets all over the board, as this will simply confuse matters. It’s much easier to learn when studying a single bet.

What to Look for in an Online Craps Venue

Choosing an online casino for craps should first involve checking out the different welcome bonuses they offer to players. This is because these can lead to some huge amounts of money being placed into your account. You should also check to see how many craps variations a casino offers – and if they even offer craps at all – and should also look out for any live casino craps games. Finally, it’s vitally important that you pick a casino that’s honest and trustworthy. This can be done by only playing at online casinos regulated by the UK Gambling Commission.

You’ll be able to find out all of the information you need about the different casinos offering craps by reading our casino reviews. These will tell you about the bonuses and games a site offers, plus they’re all completely honest and unbiased, as we’re not associated with any online casino in the United Kingdom.