Most online gamblers are familiar with the Thunderstruck slot machine released by Microgaming, Thunderstruck II is the more popular and modern spinoff to that first game. It has improved graphics, features and better prizes for you to pick up as you play along as well. Just make sure you have a decent computer or mobile device to experience this game, because the graphics and audio involved are very attractive compared to other slot machines you’ll find.

The Thunderstruck II free slots is a colorful Norse themed game that takes many of the gods and respected characters from Norse lore and brings them all to an attractive slot machine. It gives you a high level of control over the amount that you bet, and you can gamble between £.01 and £.05 per coin of the game up to a maximum of 300 coins overall or £15 a spin. Sure you won’t be betting a huge amount as you play this game, but that’s likely for the best since the top jackpot amount isn’t very high either.

From the very start of the game it’s up to you to choose a value for your coins and to pick out a bet level to control the total number of coins as well. With 15 paylines you can bet as little as 15 coins valued at £.01, or as many as 150 coins valued at £1.00 providing you with an excellent betting range. There are 10 bet levels to pick from, and each additional level adds 15 more coins to the mix.

Your main goal while going through the Thunderstruck II slot game is to work your way up to the top free spin rounds of the game. The Thor free spin game will give you a total of 25 free spins, and can be much more lucrative than any of the other rounds, though you do get a nice 5x multiplier at the Valkyrie free spin round right in the beginning. Each time that you get another free spin game bonus you’ll take one step closer to being at the Thor rounds of the game with the highest free spin bonus. Even when you stop playing and come back to this game once again, you’ll be able to pick up where you left off and keep working toward that goal of the top free spin again.

While there aren’t too many special bonus features other than the free spin rounds to enjoy, there is a pretty cool stacked wild feature that you’ll notice as you play the Thunderstruck II slot game. The whole time that you play you’ll have a chance to get a stacked wild on one of the reels. These stacked wilds lead to major prizes throughout the reel in most instances and some nice payouts. With a couple wilds stacked up on the reels you can win several different prizes all at the same time and substantial amounts.

If you haven’t gotten many wilds so far make sure that you keep playing for a bit to take advantage of the additional prizes they will help you win. Wilds make a big difference in the game and offer a real opportunity to be successful outside of the free spin rounds that are so popular in the game.

The Thunderstruck II slot offers four different free play rounds that you can unlock as you play along. In order to unlock these rounds you have to get at least three of the scatter symbols or Thor’s hammer symbols on the reels at the same time. When you do this you’ll be presented with one of the four different free spin rounds.

For the first four times in this feature you’ll play the Valkyrie game, from the 5th through the 9th you’ll play the Loki game, between 10 and 14 you will play the Odin game and once you make it to time number 15 you get to enjoy the lucrative Thor feature. There are different bonuses and enhancements depending on which of the free spin features you are on in the Thunderstruck II slot machine.

The full jackpot offered with this game is just 1000 coins, which isn’t very great by any standards, but frequent wins and plenty of different chances to cash in while playing this game makes it enjoyable. Just plan on winning your prize money over many smaller wins, rather than one massive payout like you might get at a different slot game and you won’t be disappointed as you play along.

As one of the most popular games that Microgaming has ever offered, the Thunderstruck II free slots are available to most mobile devices through apps and through instant play. No matter how you want to experience the content, you can do so. A range of different smartphone and tablet devices are supported, so that you can play easily with whatever technology you have laying around your home. That’s the major benefit of playing this slot game, and yet another reason that so many people are willing to sit down and give it a shot. 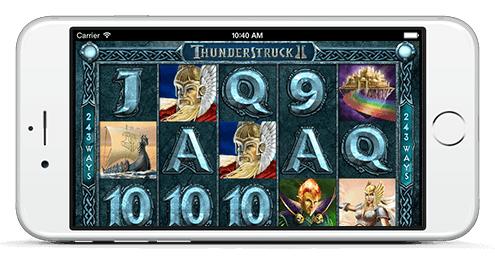 The Thunderstruck II slot machine is a bit disappointing when you consider the bonus that it offers to players, but thanks to excellent mobile support, a cool theme and many different free spin bonus rounds, the game is still a clear winner and one of the most popular slot machine varieties on offer. If you are a high roller that likes to bet a lot, or you are looking for a massive jackpot win, you likely won’t be satisfied with this game. Otherwise Thunderstruck II slot has a lot to offer to players looking for a bit of fun at an affordable rate.

There are few games that are similar to the Thunderstruck II slots, but that doesn’t mean that you can’t try some of them anyway. Many come with free spin rounds or fun bonus games just like the slot does, and some have attractive themes as well. Try out a few to see if you like any of them, and if you don’t you can always go back to Thunderstruck II anyway.