The Starburst slot machine looks every bit the part a brilliant arcade game that you simply can’t take your eyes off of. It has glowing gems in all different shapes and colours, and the whole screen lights up in a brilliant flash and every time that you have a win. The game is fast-paced and offers a unique wild feature that makes it even more exciting for you to play along with. You’ll find yourself growing attached to this game, and with large jackpot bonuses at stake you could benefit significantly by playing this game often enough.

Unfortunately the free play version of Starburst is no longer available. Rainbow Riches offers you a similar game, and you can also try out more free games here.
PLAY FOR REAL MONEY - GET A £1000 BONUS AT BETWAY CASINO

Once you get over looking at the beautiful graphics displayed in the Starburst slot game you can begin placing your bets and working toward the impressive bonus wins of this game. With a bet range of between £.10 and £100 per spin, you can wager just as much or as little as you’d like while playing the Starburst slot.

The graphics and audio of this game give it a cosmic feel and make it look like an arcade game, and you get some more arcade-like features anytime that you get starburst wilds on the reels. When there are three or more of those wilds they lock into place at the centre and respin three additional times with the wilds in place to give you a chance for truly impressive bonus wins. If any additional starburst wilds appear while the first three are locked in the middle you’ll receive a bonus as well as an additional free spin while having an even better shot at bonuses and prizes.

With as much as £50,000 at stake, you’ll be eager to play this slot game, and will have many opportunities to win well over what you are betting with each and every spin of this free Starburst slot.

Before you decide if this is the game for you it is important that you play Starburst for free. There are many casinos that will allow you to do this, and some will even allow free play with real money through Starburst free spins when you join up. Try out the different features of the game, and after you are certain that you enjoy playing it you can move on to playing for pounds to hopefully get at some of the higher bonuses of the game itself.

There is just a single bonus game available in the Starburst slot game, and that’s the expanding wild feature. When you get three or more Starburst wilds at the centre of the reels they lock themselves in place and give you three free spins while also awarding you with a handsome bonus. If during those free rounds you get another starburst symbol, you’ll be rewarded with an even better prize on top of an additional free spin.

This expanding wild feature hits quite often as you play this arcade-style game, and you’ll come to expect it and to rely on the feature to help you win prize money as you play. You should expect many smaller jackpot wins from this feature, but you should know that as much as £50,000 is at stake when you play through this feature of the game.

A single jackpot of up to £50,000 is what draws most players to this game and gives them hope to have a real significant win. There are plenty of other bonuses at lower amounts, but everyone is playing for that one massive win as they go through the rounds. You have a great deal of control over the amount that you bet while playing the game, but to get your hands on the maximum amount you will have to bet the maximum amount possible £100 per spin. That’s more than many players are willing to risk, but even if you don’t mean to spend that much you can win a significant amount from the Starburst slot machine.

Starburst is available on mobile at nearly every casino that it is offered. That’s why if you own a tablet or a smartphone you should be ready to take advantage of that feature if you want to play while on the go. There is no reason for you to be locked in one place while you try out the game. You can play Starburst free on a mobile device as well, g9iving you ample time to test it out and see if you enjoy how it plays on mobile before you spend any of your own money on the game. Test it out and decide if you enjoy the smaller screen experience, since the game doesn’t have a bunch of bonuses or actions for you to take, it works quite well on a smartphone or tablet screen. 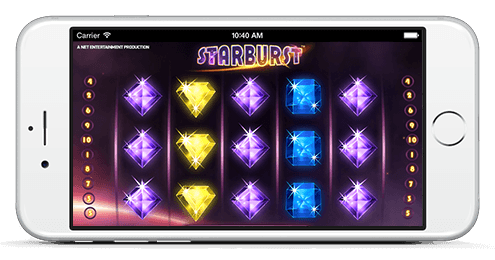 Starburst is a simple slot game, but it is a lucrative one that’s a lot of fun to play. It feels highly dynamic and fast-paced when you play it on your computer or mobile device. There is always something going on with the game, and each time that you win a prize you’ll light up with excitement just as the game does. With as much as £50,000 on the line you have nothing to lose by trying out the game, and a whole lot to win in the process. It’s simple to play and easy to pick up. You can start playing just a few moments and you’ll be comfortable with the limited features of the games just as quickly.

Starburst is highly unique and there aren’t many games out there just like it. If you enjoy the way that it plays you can try out other slots that are arcade-themed and have similar features. There are many simple games that are exciting to play, you just have to give them a try. Test out some of the similar options below and you’ll soon see that there are other slot games worth playing as well. With some tests you could even turn up a slot that you enjoy more than this one, and have something that you want to keep on playing week after week. That’s the whole fun of looking at new slot games with different themes.