The NetEnt South Park slot game is based on the hit adult cartoon series that’s been on television for many years. The game features four children, Kyle, Stan, Kenny and Cartman, and puts them through comical events while you try to win some pretty impressive jackpots. There are four different bonus games you can be awarded with, as well as a couple mini-games to keep things interesting. You can play South Park for free, but after getting used to the game you’ll likely want to play with real money for a shot at the top jackpot worth 5,000 times your stake.

From the very beginning there is a lot to enjoy about the South Park slot game. It brings the life and energy of the TV show to a slot machine format. You’ll enjoy the funny little characters and all the quirky animations as you play the game. For instance, with the Stan bonus he vomits all over Wendy before the game begins, and in the Cartman bonus you have to help him hunt hippies. If you enjoy the controversial comedy you’ll fall in love with this game.

You can start playing the South Park slot machine by setting up your overall wager amount. You can pick between 25 and 250 coins wagered every round, and set the value of each coin between £.01 and £.50 for a minimum bet of £.25 and a maximum of £125.

Once the wager is set it’s time to get playing and working your way toward one of the many bonuses. There are four different main bonuses, each one based on one of the main four characters. There are also three mini features that give you more opportunity to win money from the game in between the major bonuses.

There are four different bonus games and three mini games present in this South Park slot game. Each one has something special to offer and will help make you some money. If you play this slot machine over an extended period you’ll likely get to try out at least a couple of these features.

To unlock any of the four character bonus games you need two bonus symbols on reels 3 and 4 a character symbol on the 5th reel. The character symbol determines which of the four bonuses you are going to get. The Stan bonus gives you sticky wilds that stick to the reels starting in the centre and then adding on as you go through 2 free spins.

The Kyle bonus gives you 10 free spins where you’ll look out for a baby Ike symbol. If Ike appears Kyle will kick him down into one of the four bonuses down below including prize coin amounts and multipliers.

The Kenny bonus gives you as set of three lives and you must send Kenny through different zones as you try to obtain prizes in the South Park free play slot. There are three zones, the Danger Zone, Multiplier Zone and the Win Zone. If you can make it through the different zones without losing all your lives you’ll rack up the prizes up to a maximum of 556x your stake.

Finally there is the Cartman bonus, the most lucrative of all the bonuses in the game. This South Park slot bonus sends you to go against hippies. Cartman must search through bushes to get hippies and avoid police in the process. It’s possible to win up to 5,000 times your stake, or £625,000 if you’re betting the full amount when you hit this bonus.

Not only are there four major bonus games, but there are also mini-games that you can make use of as you play the standard game. As you get wilds in the game you’ll trigger these mini features including a Terrance and Phillip feature that puts 3 wilds on the reels, the Mr. Hankey feature that puts 3 to 5 wilds on the reels, and the Cartman feature that puts a 3x3 block of wilds somewhere on the reels. Each can be quite lucrative as well. When you play the South Park slot game you’ll have the opportunity to win more than half a million pounds, and that’s just from a single massive jackpot. The bonus games will offer you most of your jackpot potential, but the Kenny and Cartman bonuses are by far the most lucrative and worthwhile to go after.

The South Park slot machine is highly popular and NetEnt worked hard to ensure it would work on most mobile devices. Break out your tablet, smartphone or full sized computer and you can play the game without a problem. It plays instantly on each of the three devices, and this means that there are no apps to worry about, and the game will work on more devices instead of less. You don’t have too much to worry about when it comes to getting the South Park slot to work, and you’ll quickly be rewarded with top-notch gameplay. You can play South Park free, so you can test it out on your device without risking any real money in the process first. 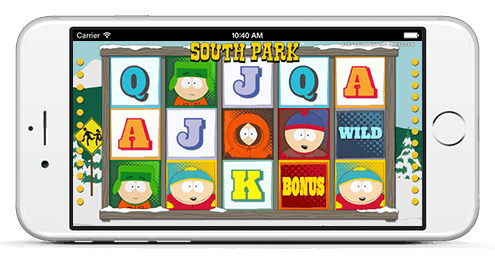 The South Park slot machine is one of the most exciting that NetEnt has released, especially if you’re a fan of the show itself. It blends some of the dark and adult humour from the show into the game, but as long as you don’t mind it you’ll likely enjoy the game. With so many mini features and bonus games there’s quite a bit to enjoy as you play through the slot. It almost feels like an arcade game as much as it does a slot machine, and for players looking for an exciting gameplay experience, that’s probably welcome news. Give it a try today and you could have your new favourite slot machine.

Few slot machines bring the same humour and combination of exciting features to a slot machine quite like the South Park slot game does, but that doesn’t mean there aren’t any comparable machines out there. NetEnt and other companies have developed several games that work similar to South Park. Sure they are different themes, but many of them are just as exciting. Some offer higher bonuses and others different features. If you enjoyed the South Park slots, you’ll likely enjoy some of the games down below as well.