One of the most popular slots online at the moment is the Microgaming-developed, Mega Moolah slot. The 5 reel, 25 payline, slot is most renowned for its reputation for creating real money instant millionaire winners through its lucrative progressive jackpots. The biggest winner recorded on Mega Moolah was a UK player identified as 26 year old Jon Heywood who won £13,213,838 in real cash on the Mega Moolah slot machine back on 6th October, 2015 at Betway Casino. The previous largest sum of the Mega Moolah winners was £5,882,594 by a player that triggered the Mega Moolah jackpot back in 2012.

Microgaming progressive jackpots might not generally be as prolific as those from other developers such as NetEnt and Playtech but Mega Moolah leads the way for the developer. Microgaming jackpots on slots such as Major Millions and King Cashalot can reach over the million pound mark, but Mega Moolah far exceeds those with an average pay out to its players of over £2 million. The smallest win recorded on Mega Moolah is £1,013,791 and it is triggered once every 12 weeks and a day, keeping its players on their toes.

Mega Moolah is a slot that revolves around an African wildlife theme. The reels have a back drop of the African savannah sunset. The symbols are made up of the animals of the Serengeti including a giraffe, buffalo, ibis, and zebra. The generic 10, Jack, Queen, King, and Ace symbols are also on the reels.

The Scatters also have a part to play in Mega Moolah. They are represented by the monkey symbols and players will need three or more of them to activate the free spins bonus feature. Once activated, players will be awarded 15 free spins with a 3x multiplier added to any wins hit during these spins. Other great extras in Mega Moolah include:

The Mega Moolah progressive game is the key to triggering the progressive win on this slot and it is randomly triggered during the game. Once triggered, players will be taken to a second screen that presents a Mega Moolah jackpot wheel. The wheel is split into different sections that represent each of the four progressive jackpots.

Mega Moolah mobile is also available for players to enjoy on a selection of mobile smartphone and tablet devices on iOS, Android, and Windows platforms. Players do not need to download an app as the slot can be played directly through the mobile casinos that are often instant play. On occasion, players might be required to download one of the mobile casino apps to access said casino. Generally, most casinos offer integrated mobile technology meaning download is not required to play on a mobile device. 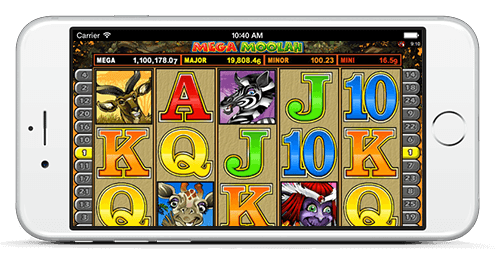 This Mega Moolah slot review might emphasize what some players already know, but hopefully it will open the eyes of players that have not yet experienced the wonder of this great slot game. Any slot that offers a progressive jackpot always has that potential X Factor, but when the slot has a history of big money winners then it is easy to see why it has garnered such a fine reputation over the years. There have been dozens instant millionaires made by Mega Moolah since it was released onto the market back in 2006. One of the biggest appealing factors is that unlike other jackpot games where a minimum bet is required to trigger the jackpot, players have been reported to win the big prize on this slot with one of the smaller bet amounts.

Another aspect of Mega Moolah that gives it that timeless feel is that even after all the years it has been on the market, it still does not feel like an old slot game. It might not have HD graphics, interactive bonuses, or innovative features, but it creates a sense of slots gaming in its simplest yet most beautiful form. It's a game that helped to revolutionize online slots gaming. Progressive jackpot slots used Mega Moolah as the benchmark and every slot has since tried to do what it has done, but better. Arguably, the majority have failed. Mega Moolah is a one in a million slot and this Mega Moolah review is only just scratching the surface. We can tell you all you want about how fun the gameplay is, how big the wins can be, and how addictive the slot is, but you can't fully appreciate its potential until you get on that game page and press that spin button for the very first time.

There are many similar slots to Mega Moolah that online slot players will enjoy. We only recommend the best of the best slots, so check out our list of related slot games below and keep the good times spinning.