Work towards fighting crime as a hard-hitting detective in the Jack Hammer slot game online. It’s decorated with comic book style graphics, and features a whole slew of completely original symbols that makes it quite unlike any other game out there. This online slot is known for its unique sticky win feature that locks a large winning prize combo on the screen for a chance at an even larger prize. It’s exciting and fun to play, and there is the opportunity to win as much as 250,000 coins while playing the game if you are very lucky.

Jack Hammer is a simple slot, but it has a lot to reward the players that test it out. You can become familiar with the game free with Jack Hammer play credits at most casinos. You must play each of the 25 paylines while playing the game, but you can adjust the coin value for each line from a minimum of £.01 to £1 for a really wide betting range of £.25 to £25. There is no gamble feature to use, but there are plenty of extras to keep things interesting.

As you play the game you’ll notice that you get free spin symbols now and then. Five of them will unlock a set of free rounds that pay out three times as much as normal. As you play through these rounds you could achieve a massive jackpot of up to 250,000 coins through the sticky wins feature if you manage to unlock that as well.

There is an autoplay feature that you can use to keep this Jack Hammer slot machine going, and a quick press of the max bet button will see you trying to maximize your earnings. It’s important to come to the game with a large bankroll, and to be prepared to play over an extended period. Even though Jack Hammer is known for its large bonuses and prizes, you could be playing for quite some time before unlocking one, and until then you have to be patient. It’s a fun game, but only for those who can wait until it’s their time to win. If you approach online slots patiently, you will really enjoy to play Jack Hammer for free or for real money.

While the sticky wins feature is exciting, you’ll likely win most of your prize money from the free spin rounds. They are difficult to unlock, and are only triggered when you have at least five free spin symbols out between all the reels. The spins automatically triple any wins that you get while enjoying them, and it’s through these free spins that you can expect some of the very largest jackpots possible.

The main reason that so many players are drawn to Jack Hammer free play, and the real money version of the game is because of the sticky wins feature. When you get a particularly good win while playing the game, it will stick on the screen and only the unhelpful reels will spin to hopefully give you an even better win overall. This feature is the one necessary to unlock the highest jackpot of the game, 250,000 coins. If you are lucky enough to unlock the Sticky Wins feature as well as the free spins round you could rack up a huge jackpot overall.

The max jackpot seems mammoth in size compared to the standard 1,000 coin fixed jackpot offered to players that get five Jack Hammer symbols while playing. You don’t have to do anything special to unlock sticky wins while playing the Jack Hammer slots, you simply have to get lucky and have a good enough combo. From there you can get some very nice prizes, though it can take quite a while to unlock the feature at all while playing.

Jack Hammer has been optimized for touch control to work with most mobile devices. If you want to experience Jack Hammer free or play with pounds on the line, you can do so on a full-sized computer, a tablet or a smartphone as well. It’s up to you which one you use to play, but if you do decide to go for one of the smaller options, you’ll notice just how smoothly the game runs and how easy it is to use on whatever device you decide on.

The best thing about this device is that there are apps available for it, and there is also a mobile browser version. The choice is really yours when trying to decide how you want to play the game. Take your time and decide which option will work the best for you, or better yet, try them all out and then decide which one you like the best out of them all. Jack Hammer is a very enjoyable game to play, and it’s even more fun when played on a touch device anywhere that you like with an Internet connection. 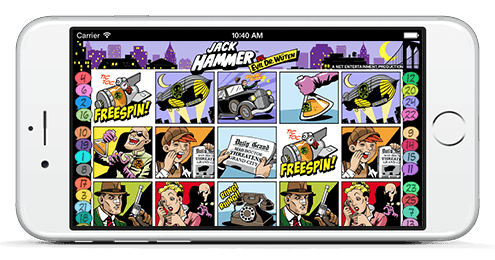 While the Jack Hammer slot has a lot to offer to players, it comes up a bit short when compared to its sequel also made by NetEnt. That’s why most people will go for the Jack Hammer slots sequel and avoid the first, unless of course they are playing for old-time’s sake. That said, the game is still fun, there are plenty of features and large enough jackpots for playing to worth it. Just remember that you’ll have to stick with the game for quite some time to unlock a massive victory from Sticky Spins, or to unlock free spins most of the time.

The most similar slot is Jack Hammer 2, but there are many other feature slots from NetEnt that are worth trying out if you enjoy this slot. Take a look at some of the slot machines below and you’ll see that you can play many different options for real money. You’ll probably enjoy quite a few of them if you take the time to try them out. Just as it is possible to play Jack Hammer free at many locations, you can do the same with many of these as well if you decide you want to test them out.